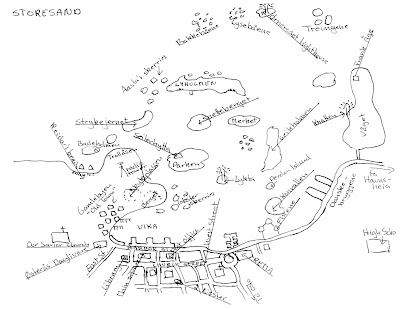 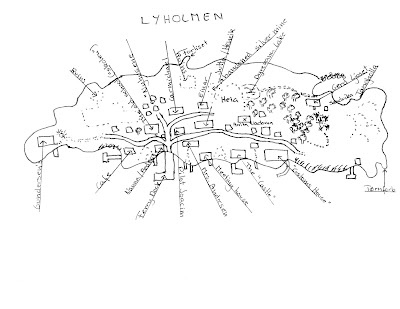 
She was having a heart attack. There was a weight on her chest that could not be dislodged. “I guess I’ll just die,” Gerd thought, ”since I don’t know where my phone is and no one could rescue me in this weather anyway.”
Next thought: “Is that weight purring?”
She opened her eyes to slits. All 12 kilos of Bamse were in her face pawing her nose and suggesting – delicately – that it was time to get up and feed him again.
“Get off, cat!”
With a mighty heave she sent him sprawling. Or tried to. Bamse never accepted any heaving: coming or going was entirely his choice. He stretched languidly on her chest and turned around once. Then, and only then, did he deign to gather his forces and jump off the bed.
“Goddamn cat.”
Bamse paid her no attention and started strolling in his slow regal way toward the kitchen, where he would meow up an ear-splitting racket for hours until she got up to feed him. Gerd gathered her senses about her and listened. She didn’t hear the howl of the southeast gale. In fact, the only thing she heard was seagulls cawing and maybe – yes! – the chirping of a few sparrows that had wintered over in her shed roof. She was alive – no doubt about it – and she was needed.
She had been so exhausted last night that she hadn’t bothered with a nightgown. Gerd ran a hand down her side: no, no nightgown. She was naked under the down quilt and all alone. Well, except for Bamse, but he hardly counted in bed. Her body felt watery, weak. She pulled a hand out from under the quilt and looked at it. It looked like her hand: brown, short fingers, very un-artistic, her mom would say. She pulled the quilt down a little; would it be cold? But her bedroom – actually her spare bedroom downstairs since she hadn’t dared to go upstairs last night – was warm and cozy.
Something bright caught her eye on the side of her bed. Her phone; she must have put it there just before collapsing last night. She grabbed it: 7am. Jonas would be just getting his breakfast before heading off to school. Skies or bicycle? She thought the latter. Gathering the phone and peering at the recent messages she touched his latest from the night before. On her end it was just rings, but she knew it played the hallelujah chorus on his end. Was he in the shower?
“Jenta mi.”
“It’s so quiet here.”
“Did the power go off?”
“Yeah. Bamse kept me company.”
“I should have been there.”
“Are you up? I’m still in bed.”
“I’m on my way out the door, Can I come out after school?”
“Please.”
“I love you, baby.”
“I love you, too. Don’t let the kids get to you.”
“No fear. I’ll be there around 5.”
Bamse’s howl of incipient demise from starvation registered in her brain. “OK, OK, I’m on my way.”
Gerd tentatively put one foot on the floor. Not impossible. The other foot followed. When she shucked off the quilt, she felt the cool of a fire she had let die the night before. No problem, she could stoke it back to life. Her soggy clothes from the boat-saving expedition were in a wet heap on the floor. She shivered and ran naked up the stairs to her proper bedroom, yanked open the armoire, and pulled out some pants, a T-shirt, and a sweater. Wool socks from the dresser. As she made it down the stairs a little more respectably, she realized she was going commando. Ummmm, feels good.
Bamse was nearly in hysterics about the absence of breakfast. She grabbed a can of whatever-catfood from her pantry. In usual circumstances, a gourmand like Bamse would turn up his nose at such fare, but this morning he was subdued. He fell upon the gelatinous mass like a sinner at his last confession.
She needed coffee. But the coffee maker needed power. Gerd flipped the light switch near the door to see if the power had been restored. The two 60-watt bulbs in the overhead light clicked on at once. Hello!
Gerd ground some Fair Trade coffee and measured it into the basket. Water from the tap (she had city water!), and the “on” button glowed welcoming red. Gurgling ensued.
When she had enough to steal one single cup, Gerd carried it to the windows in the living room. A pale February morning greeted her. Steel blue light on the water. The ocean surface was deceptively calm. Out there, the waves would top 6 feet, she was sure, but you couldn’t see that from the window.
The blasted phone rang again. Gerd had moved to the island to get away from the constant commerce of people but at the same time she had wired the house for wi-fi in every room. Maybe it wasn’t so much that she wanted to get away from people altogether as wanting to keep them at a distance. Too many people knew her cell number; that was the problem. Change to an unlisted number? The phone rang the troll dance from Peer Gynt.
“Hello mother.”
“Did you send the flowers?”
“I hope you’re well, too.”
“What? Have you lost your mind, Gerd? Did you send the flowers or not?”
“I’m sure I did,” Gerd thought this response would calm the Valkyrie.
“You don’t even know what I’m talking about, do you? The funeral? Hans Tobiassen? Yesterday?”
“Old Tobiassen died?”
“Good god, girl, have you completely gone to seed out there on that godforsaken island?”

Jia
An intense reader and occasional writer. Born and raised in Norway, Europe. I have two blogs going: one about mystery novels and one about design and lifecraft. Enjoy!